Course How to Meditate 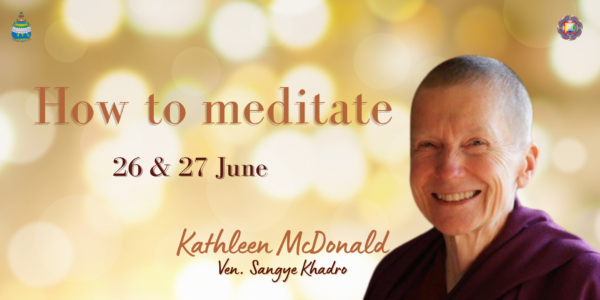 What is meditation? The Tibetan word for meditation is gom, which means “to become familiar”. Thus, meditating is “making the mind familiar with positive attitudes and states.” The real purpose of meditating in Buddhism is to gradually transform the mind, its negative and harmful aspects, and augment the positive and beneficial ones.

This course is intended for people with little or no knowledge of meditation and Buddhism. It is an introductory course for people who learn to meditate, but who avoid anything “religious”. For those who are already a practitioner, it is a great opportunity to get even deeper, practice and clarify your doubts with a western teacher who has been practicing for almost 50 years and has taught for 40 years. Will you lose it?

Originally from California, Kathleen McDonald (Sangye Khadro) began studying Buddhism with Tibetan lamas in Dharamsala, India, in 1973. She became a nun in Nepal the following year, and received full (bhikshuni) ordination in 1988.

While studying at Nalanda Monastery in France in the 1980s, she helped to start the Dorje Pamo Nunnery, along with Ven. Thubten Chodron.

At the request of her teachers, She began teaching in 1979 and was a resident teacher at Amitabha Buddhist Centre in Singapore for 11 years.

She followed the Masters Program at  Lama Tsong Khapa Institute in Italy from 2008 – 2013, and was resident teacher at the FPMT center in Denmark from 2016-2017.

Nowdays she lives in the Sravasti Abbey monastery, founded by Ven. Thubten Chodron and her longtime friend.

Ven. Sangye Khadro has authored several books, including the best-selling, How to Meditate, now in its 17th printing, which has been translated into thirteen languages.

The whole teachings will be in 2 days with 2 sessions a day in the afternoon:

If you are not able to attend all of them, the teachings will be recorded and available for two months.

Of course to attend Ven Sangye Khadros´s teachings LIVE is much more powerful.

Watch the video to know how it will be the weekend course Kathleen McDonald (Ven Sangye Khadro) .

Your donation is a practice of generosity so that the Shiwa Lha Center continues with the turning of the Wheel of Dharma. Your contribution helps in offerings to Ven. Sangye Khadro, interpreter, translations of material and maintenance and expenses of the Shiwa Lha Center.

We suggest a contribution of R$25 for the whole course.

Your donation is to be within your means, with any amount donated you will participate in the event.

If you want to give a subscription to another person or in case of any doubt, get in touch by cursos@shiwalha.org.br