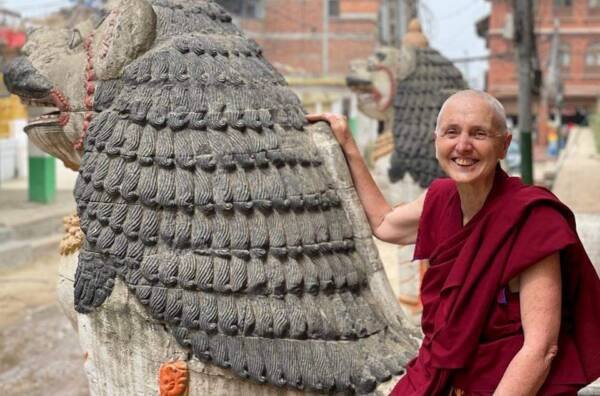 Ven Sarah was born in London, UK. After graduating from university in 1982, she traveled to India and Nepal where she met lama Yeshe and lama Zopa Rinpoche at kopan and her life dela was forever changed. In 1986 she ordained with His Holiness Dalai Lama in Bodhgaya.

She has worked as an editor of Dharma publications and also taught around the world. She Brazil in 2006 visited(?) at the request of Lama Zopa Rinpoche and still cherishes the memories from that visit.

To find a way out of suffering, you must find a guide who has already found the way out and can show how to do it yourself.

Your donation is a practice of generosity so that the Shiwa Lha Center can continue with the turning of the Wheel of Dharma. Your contribution helps in offerings to Ven Sarah Tresher interpreter, translations of material and maintenance and expenses of the Shiwa Lha Center.

We sugest a donation by US$5 for both events for a talk with Ven Sarah Tresher.

It is with joy that we received your registration for the event with Ven. Robina Courtin “Spiritual Mentor”. To confirm it, please make the donation by clicking on the PayPal button.

This course considers the role of the teacher on the spiritual path, how to find the “right” teacher, and how to relate to that teacher once we have established a connection with them. We will also discuss skillful ways to proceed if difficulties with one’s teacher are experienced and how to practice “guru devotion” most effectively on the path to enlightenment.

According to Tibetan Buddhism, in order to understand new, vast and profound concepts about our mind, it is necessary to hear, read and contemplate the subject several times. Therefore, we offer you three complementary events about the Spiritual Master:

If you were not able to attend all of them, the teachings were recorded and available for two months.

Of course to attend Robina´s teaching´s LIVE is much more powerful!

Since discovering the Buddhist path and ordaining as a nun in 1978 – Ven. Robina has worked full time for her heart lamas, Lama Thubten Yeshe and Lama Zopa Rinpoche, and their Foundation for the Preservation of the Mahayana Tradition (FPMT).

At Wisdom Publications between 1978 and 1987 she oversaw at various times its design, production, and editorial activities. Also at Wisdom, she co-edited two issues of Wisdom Magazine – the forerunner of FPMT’s Mandala Magazine, which she edited from 1994 until 2000.

She was executive director of Liberation Prison Project from 1996 until 2009, establishing it as a non-profit in both the US and Australia.

She has edited numerous books of the lamas, including Becoming the Compassion Buddha, Bliss of Inner Fire and Dear Lama Zopa.

These days she travels throughout the year, teaching at the centers, and edits for publication the lamas’ teachings.

She is Known for her extraordinary energy and fiery compassion, Ven. Robina’s life and work have been the subject of documentary films Chasing Buddha and Key to Freedom.